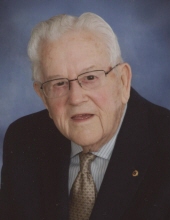 Funeral services will be held at 1:30 PM Thursday, July 18, 2019 at the Wesley United Methodist Church with the Rev. Craig Luttrell officiating. Interment will follow in the Memorial Park Cemetery. Visitation will be held from 4 until 6 PM Wednesday, July 17, 2019 at the Major Erickson Funeral Home, 111 North Pennsylvania Ave., Mason City. Memorials may be directed to the James Rasmussen Memorial Fund in care of the family.

James grew up in the Crystal Lake area. He attended Crystal Lake area schools and graduated from Kensett High School in 1942. He attended Waldorf College in Forest City before entering the U.S. Navy. James attended the University of Wisconsin in the Navy Reserve Program and then was assigned to the Amphibian Service where he participated in the U.S. invasion of Iwo Jima and Okinawa. He was a crew member of a new LST ship. James was a head quartermaster and head Helmsman and he steered the ship through the Panama Canal into the Pacific Ocean. He was discharged March 16, 1946.

James was united into marriage to Winifred A. Rasmussen on March 2, 1946. Jim and Winnie moved to Michigan and he graduated from the University of Michigan in 1947. They returned to Mason City and Jim began working for the Stockberger trucking business in management for 43 years.

Jim was a long time member of Wesley United Methodist Church. He was active in Wesley’s Men’s Club, served on several committees, and with his sister, Leona, organized Golden Age Bus Trips.

Jim and Winnie participated in Square Dancing for over 30 years, as well as ballroom dancing. They were a part of the Wigwam and Wagon Camping Club for many years. Jim was a past member of the Mason City Evening Lions. They also owned a cottage at Clear Lake for 30 years. Many good family memories were made from these activities.

Jim was preceded in death by his wife, Winifred A. Rasmussen; daughter Caroline Dyer; his parents and parents-in-law. He is also preceded in death by his sister, Wilma and her husband John Rickena; sister, Leona and her husband Lee Buffington; brothers-in-law, Lloyd Stockberger, George Stockberger; sisters-in-law, Viola Fisk, Ellen Weiss, and Betty Clarke.

Jim loved dogs and enjoyed the company of many dogs during his lifetime; he especially enjoyed his last dog, Teva.

To send flowers to the family in memory of James "Jim" Rasmussen, please visit our flower store.