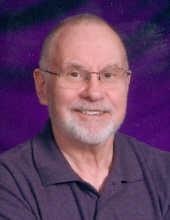 Jim worked at the local soybean plant (15 years) and managed Regency Terrace Apartments (15 years) until his retirement in 2002. He then worked at Hy-Vee (2 years) and Martin Brothers (10 years) with his 2nd retirement in June of 2017. He found happiness again when he married Sue (Calvert) Hallman on January 6, 2017. Although their time together was short, it was filled with much love and happiness.

Jim was a goofy guy who kept all who knew him laughing. He never met a stranger, and made friends feel like family. Jim was a hard worker who took great pride in everything he did. He has left all who knew him with memories of funny stories. He always had his "people" to take care of any situation!

Jim enjoyed spending time with his family, especially his grandchildren. Other interests included watching movies, camping, organic gardening, traveling, and working at Martin Brothers. He was proud of his 35 years of sobriety and found joy in helping others in recovery. He was a member of Praise Community Church, Mended Hearts #222 and volunteered at Mercy Medical Center - North Iowa.

He was preceded in death by his parents; his first wife; a sister in infancy; and his father and mother-in-law.

To send flowers to the family in memory of James "Jim" R. Hallman, please visit our flower store.