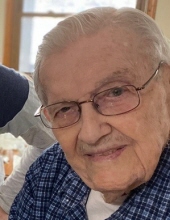 James J. Holahan, 94, of Mason City, passed away on Saturday, May 30, 2020 at the MercyOne Hospice Inpatient Unit.

A private graveside service will be held at Elmwood-St. Joseph Cemetery.

Memorials may be directed to MercyOne North Iowa Hospice.

James Jacob Holahan was born on July 11, 1925 in Madison, South Dakota to parents John and Elsbeth (Kundert) Holahan. He graduated from East High School in Sioux City, Iowa in 1943. Shortly after graduation, Jim enlisted in the United States Army Air Corps. He was in the 8th Air Force, 95th Bomb Group. Jim was a gunner and bombardier on a B-17 and was stationed in England. He was honorably discharged in 1945. After returning home, Jim attended the University of Iowa, and he graduated in 1949 with a Bachelor of Business Degree.

Jim was united into marriage to Janice Bryne in 1947. To this union, three sons were born: Christopher, Michael, and Patrick.

Jim was preceded in death by his parents, John and Elsbeth Holahan; and parents-in-law, Peder and Anna Bryne.

To send flowers to the family in memory of James "Jim" J. Holahan, please visit our flower store.