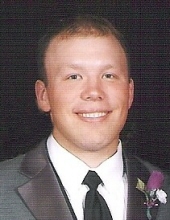 James Forrest Erickson, 32, of Mason City, IA, passed away on Friday May 5, 2017, at the Muse Norris Hospice Inpatient Unit after a long and courageous battle with cancer. Funeral services will be held at 1:00 PM on Tuesday May 9, 2017, at Major Erickson Funeral Home, 111 N. Pennsylvania Avenue, with Pastor Art Zewert from Hospice of North Iowa officiating. Military honors will be conducted by the Mason City Veterans Association. Visitation will be from 5:00 PM – 7:00 PM on Monday, May 8, 2017, at Major Erickson Funeral Home. Memorials may be directed to My Happy Haven in care of the James Erickson Memorial Fund; PO Box 982, Mason City, IA 50401.

James was born on May 9, 1984 to Konnie (Branstad) Ellis. He attended school in Mason City and later moved to Northwood where he graduated in 2001. He met the love of his life Sara Ann Smith in June of 2005 and the two were married on August 19, 2006. On their wedding day, James proudly announced his aspiration to have eight (8) children. Though challenged during their marriage by an auto accident for Sara and James’ battle with cancer, they remained steadfast in their love and commitment for one another. They are a testament to love, honoring your vows, and doing the work to make a marriage last. James joined the Army National Guard in 2006 and graduated from basic training in Fort Benning Georgia in March 2007. He later enrolled in Officer Candidate School (OCS) and was proud to accept his commission. While in the National Guard, James worked for Best Buy’s “Geek Squad” and went to nursing school. He became a RN in 2009 and soon after that he starting working for Mercy Medical and Covenant Hospital in Waterloo. In November of 2013 James landed his dream job at the VA Hospital in Minneapolis working overnights in the ICU, but life is never simple. On November 30th 2013 James was diagnosed with a rare form of cancer. As a nurse he understood the severity of his condition and as a soldier he chose to push forward so that doctors could learn more about his condition and help those who might follow in his path. James loved learning about computers, nursing, home improvement, and history. He was a natural leader who took every opportunity to teach and encourage others. His favorite students were his nephews. He spent countless hours playing video games with Jayden and just as many hours teaching Dean and Konlin, about wrestling, sportsmanship and life.

James is preceded in death by his niece Kathryne Perry, Grandmother Jill Larson, and Grandfathers August Branstad and Jerry Erickson.

To send flowers to the family in memory of James F. Erickson, please visit our flower store.