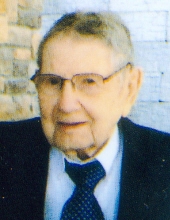 James Lowell Chesnut, 93, died on Thursday, May 17th, while in hospice care at the Heritage Care Center, Mason City, Iowa, with dear ones by his side.

A memorial service will be held at 11 a.m. on Saturday, June 2, at Major-Erickson Funeral Home in Mason City. Pastor Linda Johnson Prestholt will officiate the memorial.

Inurnment will be held in Elmwood - St. Joseph Cemetery immediately following the service.

Military honors will be conducted by the Mason City Veteran’s Association.

Donations may be made in honor of his memory to the IOOF Home or the Heritage Care Center where he received loving care by many nurses, aides, assistants and therapists over the last 7 months.

Jim was born in February of 1925, in Arkansas, the son of Thomas and Ruth (Beard) Chesnut. He completed his early education in Arkansas, before moving to Garner, where he graduated from the high school there. He also attended Mason City Junior College, then enlisted in the Army in 1943 and later received a medical discharge. Jim was a Rifleman Platoon Sergeant and received a WWII Victory Medal, an American Campaign Medal and a Good Conduct Medal. Soon after, Jim fell in love with, and married, Betty Thornbury at the Little Brown Church. They built their lives around their two boys, Steven and Douglas, close family and friends and later their grandchildren. Jim and Betty were married for 62 years.

Jim made radiology an important facet of his life, after receiving training at St. Joseph Mercy Hospital from the Cerro Gordo county Coroner. He learned a wealth of information regarding the human body while assisting in autopsies and other medical procedures. This led to a career as Program Director of the Radiology Department and also as a teacher to students enrolled in the Radiology program. He retired after 42 years.

Jim was a member of the American Registry for Radiology Technology and a Lifetime Member of the Disabled American Veterans.

Those left to cherish his memory are his two sons, Steve, his wife Joy, and Doug, and wife, Dana, four grandchildren, Cami (Ryan) Fleming, Kyle (Courtney) Chesnut, Chad Chesnut, and Jared Chesnut, as well as Derrick (Chrisse) Faught, and Stacy (Chad) Henniger, and seven great-grandchildren, a niece, Gloria Ganshert, and a nephew, Kenny Chesnut, a sister-in-law, Bonnie Haberkorn, and her husband, Bob, and another sister-in-law, Carol Lindsay and many nieces and nephews. In addition, a dear friend and companion, Pauline, who gave him a zest for life and love these past 7 years.

Jim is proceeded in death by his wife, Betty, his parents, his sister, Nova and her husband, Elton Kobernusz, brother Loyd, and his wife, Shirlene, a baby sister, Inez, as well as a grandson, Colin.

To send flowers to the family in memory of James E. "Lowell" Chesnut, please visit our flower store.