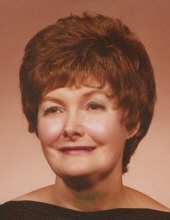 Graveside services will be held at 1 P.M. Wednesday at the Elmwood-St. Joseph Cemetery with Pastor Dave Byrd officiating.

Visitation will be held Tuesday from 5 until 6 P.M. at the Major Erickson Funeral Home, 111 N. Pennsylvania Ave.

Jacquelyn was born September 29, 1929 in Rockford, IL to Valoris and Ruth (Aakin) Abel. She has lived in several places including Las Vegas where she babysat for Bob Newhart and other stars. She was also a great waitress, who worked extremely hard at making her customers comfortable and cared for. She enjoyed evenings out dancing and was known for her sense of humor. One never knew what would come out of her mouth.

Jacquelyn was preceded in death by her parents and husband, Wayne Dunavan.

To send flowers to the family in memory of Jacquelyn M. (Albers) Dunavan, please visit our flower store.