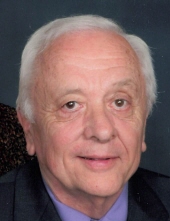 Per Jack’s wishes, a private funeral service will be held followed by burial at Elmwood-St. Joseph Cemetery.

Jack worked as a salesman for Heinz and Proctor & Gamble while they lived in Chicago. They then moved back to Mason City in 1964 and worked for Butter Nut Coffee and Coca-Cola Foods as a territory manager until 1993, and then for Nestle Foods until his retirement.

Jack enjoyed pheasant hunting, fishing, spending time in Clear Lake, helping his son Bob with sports broadcasts on KRIB, and enjoying instrumental music concerts. He also was active in planning class reunions for the Mason City High School Class of 1956 and having coffee daily with his friends at HyVee. He enjoyed spending time with his family, grandchildren & great-grandchildren.

To send flowers to the family in memory of Jack J. Fisher, please visit our flower store.