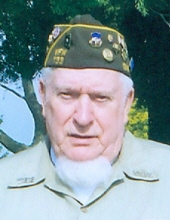 Jack was born January 24, 1934, in Mason City, the son of Gordon and Edna Marie (Warner) McCourt. He graduated from Mason City High School in 1952. Jack was drafted into the U.S. Army and pulled a tour in Korea with the 24th Infantry Division until his honorable discharge. On April 7, 1979, Jack married Thelma Carmody in Las Vegas, NV. Jack worked for Wayne Pope Construction for many years before going into business for himself as a carpenter until his retirement in 2006. Jack’s many joys included spending time and taking care of his mother. He also enjoyed fishing trips to Canada and Alaska, as well as flying with his friends Hoyt and Dave to many destinations. Jack was a huge advocate for Drivers Education and students education in Mason City Public Schools. Jack was a member of the VFW and NRA. Jack was most proud of being part of the military honor guard, where he performed over 700 military rites for funerals.

He was preceded in death by his parents, his wife Thelma, his best friend Rollie True, and his little dog buddy.

Jack would like to give special thanks for the excellent care he received over the years from the Veterans Administration. This includes the Mason City VA Clinic, the Des Moines and Iowa City VA Hospitals, and the support staff from the VA and Hospice in the last few months. He also appreciated all the help he received from his good friends Nurse Sue Madson, Sharon, Jamie, Amber, Chris and Dorothy. They made his life a lot better in his older age.

The family requests no memorial donations be made, per Jack’s request.

To send flowers to the family in memory of Jack G. McCourt, please visit our flower store.