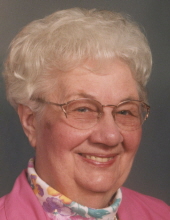 Interment will be in Plymouth Oakwood Cemetery.

Visitation will be held one hour prior to service time on Friday.

Memorials may be directed to the family of Irene Ward.

Irene Lydia Ward was born December 4, 1925, to Emil and Clara (Wilde) Borchardt on the family farm in Worth County, Iowa. Irene was baptized and confirmed at St. John's Lutheran Church, Rock Township in Mitchell County.

Irene received her education at country school Union #7 in Worth County. On August 29, 1948, Irene was united in marriage to Walter E. Ward at St. John's Lutheran Church. They lived their entire married life in Plymouth, Iowa.

Irene enjoyed spending time with her family, especially her grandchildren and great grandchildren. She was a homemaker, gardener, quilter and enthusiastic antique collector, especially doll and teddy bear collecting. She and Walter enjoyed many family vacations that included detouring to every antique shop along the way, and later, sightseeing bus trips, attending the yearly Old Threshers Reunion in Mt. Pleasant, Iowa, and fall trips with family to the Mississippi River for apples and enjoying the fall colors. Irene was a member of St. James Lutheran Church, Mason City.

To send flowers to the family in memory of Irene L. Ward, please visit our flower store.