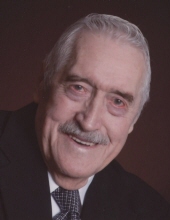 Howard W. Cooper, 93, of Mason City, died on Monday, October 28, 2019 at the IOOF Home under Hospice of North Iowa care in Mason City. A funeral service will be held Friday, November 1, 2019 at 10:30 a.m. at First United Methodist Church, 119 South Georgia, with Rev. Dan Fernandez officiating. Visitation will be held on Thursday, October 31, 2019 from 4:00 p.m. – 7:00 p.m. at Major Erickson Funeral Home, 111 North Pennsylvania. Interment will be at Elmwood- St. Joseph Cemetery. Memorials may be directed to the family of Howard Cooper. These memorials in care of the family will be sent to First United Methodist Church and the Mason City Veterans Association.

Howard William Cooper was born on November 21, 1925 to parents Howard and Eliza (Robeson) Cooper in Little Cedar, Iowa. He was the oldest of nine children. Growing up, Howie would work odd jobs to help support the large family. While in school, he enjoyed playing basketball and graduated from Osage High School. He immediately entered the Army on June 23, 1944, causing him to grow up fast.

Howard W. Cooper, Private First Class, Company M, 3rd Battalion, 39th Infantry Regiment, 9th Infantry Division. He was a first heavy machine gunner in World War II. He fought the following battles and campaigns: Ardennes (Battle of the Bulge), Rhineland and Central Europe. While in the service, he earned several honors and decorations, some of which included the Purple Heart, European African Middle Eastern Theater Service Medal, and Good Conduct Medal. He was wounded on March 24, 1945 in Germany during the Battle of the Bulge. Private Howard Cooper received his Purple Heart as a result of enemy action in the Huhm, Germany area. He was honorably discharged in May 6, 1946.

Upon return from the war, he worked at Brick & Tile in Sheffield, Iowa. He attended mechanic school in Kansas City, Missouri, where he then worked for various garages in the Mason City and Clear Lake area. He then drove truck for Hoxie Fruit Company until closing and then Mitchell Transport where he eventually retired.

On July 4, 1946 he met the love of his life Delores Hansen. Howard was united into marriage to Delores Hansen on November 12, 1950 in Manly, Iowa. To this union, four daughters were born: Coleen, Rhonda, Kim, and Lisa.

Throughout his life he enjoyed pheasant hunting, slow pitch softball, horseshoes, camping and traveling the United States. He enjoyed playing many hands of 500 with family and friends. His family was always blessed with a two week summer vacation. In their later years, Howie and Dee also looked forward to their winters in Texas.

On September 7, 2010, he was once again honored for his military service by being chosen to participate in Honor Flight Winnebago. His chaperone for the day ended up being one of his dearest friends.

The most important thing to Howard was his family and the time spent together. Holidays, picnics, parades, food, and fun. He always enjoyed following the grandkids activities. He would always say, “there is nothing better than family.”

Howard is preceded in death by his wife, Delores; parents, Howard and Eliza Cooper; sisters, Twila, Dorothy, and Wava Jean; brothers, Walt and Don; and many loved ones.

To send flowers to the family in memory of Howard W. Cooper, please visit our flower store.