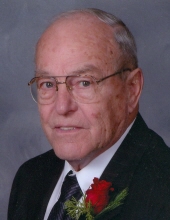 Howard Jerome Marshall, 87, of Nora Springs, died Saturday January 20, 2018 at the Nora Springs Care Center. Funeral services will be held at 10:30 AM Wednesday, January 24, 2018 at the First United Methodist Church, Nora Springs, with the Pastor Jim Roth officiating. Interment will follow in the Park Cemetery. Visitation will be held from 5 until 7 PM Tuesday at Major Erickson Funeral Home, 111 North Pennsylvania Ave. The family requests no memorial donations be made.

Howard was born September 10, 1930 in Nora Springs the son of George “Bud” and Ida (Jensen) Marshall. Howard was raised and lived on the same road all of his life. On April 10, 1949 Howard was united in marriage to Bonnie Hansen in Nora Springs. To this union three children were born.

Howard loved the farm, and was able to farm with his son Mike for 25 years. Howard was a John Deere man and there was only one color of green in his eyes. In his later years Howard’s love for his John Deere mower satisfied some of his farming needs. He enjoyed visiting with people which helped him sell Pioneer Seed Corn for 30 years. Howard made many trips to Cobham River Lodge in Manitoba, Canada. Over the years Howard’s hobby of making walking canes out of diamond willow wood became a passion of good will. He was known to make them for his friends and family with pride and honor. Following retirement Howard and Bonnie purchased a home in Arizona and made that there winter home for several years. Howard was a member of the Mason City Elks Lodge 375, the Riverside Riders Saddle Club and the First United Methodist Church of Nora Springs.

Mr. Marshall was preceded in death by his parents, wife Bonnie, sister Dawn (Wayne) Ueker and a brother William Marshall.

To send flowers to the family in memory of Howard J. Marshall, please visit our flower store.