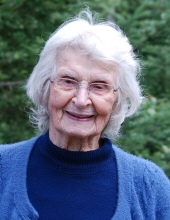 A celebration of Terry’s life will take place at a later date when all can gather together.

The family wishes to thank Heritage Care Center staff and Mercy One North Iowa Hospice for their wonderful care, kindness and support for Terry and family throughout her final days.

Those wishing to make a memorial gift may contribute to the Charles H. MacNider Art Museum, 303 2nd St. SE, Mason City, IA 50401, or a charity of your choice.

Terry was born to John and Edith (Dailey) Stalker, March 5, 1920 in Detroit, MI. She was the fourth of five children: Mary Whitenack, Harrison, Dake, and John Stalker. After graduating from Detroit High School in 1937, Terry attended The College of Wooster, Wooster, OH, graduating with a BA degree in sociology in 1941. In 1944, she completed a BS degree from Columbia University School of Nursing. That same year she married Dr. John K. MacGregor. After leaving New York City in 1945, Terry worked at University of Iowa Psychiatric Hospital, Iowa City, IA. After multiple moves during World War II and five years in Madison, WI for John’s surgical residency, they made Mason City their home in 1951. They had four children prior to their divorce in 1966. Terry remained the beloved matriarch of the family throughout her long and celebrated life.

When once asked to remember a cherished memory, Terry recalled sitting on the front porch as a child with her family after dinner, each with a book in hand, reading. Her father would take out his pocket watch at 7:00 p.m. to mark the daily run of the Tashmoo side-wheeler steamship as it traversed Lake St. Clair from Detroit to Port Huron, MI. Though an ordinary pleasure, the memory embodies the things that Terry most valued in life: family, a loving circle of friends, literature, word play, the beauty of view sheds (usually including water), and dreams of travel. These combined to create and sustain her greatest gift - being content in the moment.

Throughout her lifetime she prioritized travel. This passion was ignited at the age of 17 with a transatlantic crossing with her mother for a tour of Norway’s fjords. That initial journey set in motion her lifelong interests in languages, history, classical music, opera, foreign films, and her own artistic expression as a photographer. In the early 1960s, she explored the Caribbean’s “sun-soaked” islands on small sailboats. After educating her children, she was able to embark on trips that included the Trans-Siberian Railroad and opera tours throughout Europe.

Music was her constant companion. Across her decades, she cultivated a love of many styles of music (if not played too loudly!). This evolved into a lifetime of eclectic listening, as well as her own singing, songwriting, and guitar playing. She bestowed her lyrics on many a festive party.

In the late 1950s, Terry was a driving force in establishing a foreign film series for Mason City. As a strong supporter who helped establish and sustain the MacNider Art Museum, she brought the film series there. For fifty years, she faithfully supported the museum while enjoying its many community offerings and programs. Her adaptability, genuine interest in others, patience, integrity and humor sustained her well. She practiced enormous generosity with her family and friends. Although quite frugal in her personal life, she was graciously philanthropic. She remained open-minded and enthusiastic to new ideas. She truly lived and evolved with the times throughout her 100 years, emailing and Skyping until her eye sight failed. Her decision to buy a few shares of Apple stock at age 98 further validated her nickname, Hester the Investor!

To send flowers to the family in memory of Hester "Terry" N. MacGregor, please visit our flower store.