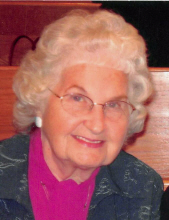 A gathering of family and friends will be held from 4:00 P.M. to 6:30 P.M., Wednesday at Major Erickson Funeral Home.

Hazel Luella Darg, the seventh of nine children of Harry B. and Hazel (Meacham) Vierkant, was born June 23, 1926 on the Reuben Holman farm SE of Rockwell. Hazel grew up on a farm seven miles SE of Mason City. She attended Bath Township No. 3 country school just across the road from where she lived. When Hazel was 15, the family moved to an acreage at Rockwell. On October 11, 1946 she was married to Robert A. Darg at her parent’s home near Rockwell. They were the parents of three children, Robert J., Barb and Marilynn. Hazel managed the Cedar Valley Produce at Rockwell, where she was employed from 1942 until 1948. She spent many years helping Bob on the family farm near Burchinal until retiring in 1989. After retiring, they enjoyed doing many carpenter projects together. Hazel and Bob often joked that Hazel was management and Bob was labor, as mom wasn’t that handy with power tools but dad always wanted her close by to “hold the other end of the board,” or help make decisions. They seldom missed an auction, flea market or garage sale. Hazel and Bob loved meeting with friends at Burger King in Mason City or Dugan’s in Rockwell. Hazel treasured her leisure time, especially reading and sewing. Bob and Hazel enjoyed 60 year together before Bob passed away in 2006.

Hazel’s family would like to give a special thanks to Oakwood Care Center and Hospice of North Iowa for the wonderful care she received.

To send flowers to the family in memory of Hazel L. Darg, please visit our flower store.