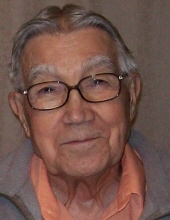 Burial will take place in Elmwood-St. Joseph Cemetery. In lieu of flowers please donate to the charity of your choice in Harold’s name.

Harold was born March 20, 1930 in Chicago, Illinois to Irene and Reginald Oppermann. He graduated from Grand Haven, MI in 1948. He married Dorothy DeWitt on June 4th of 1949. He was a tool and die maker apprentice. He felt called to the ministry which required four years of college and three years of seminary. He graduated from Hope College Holland, MI in 1954 and from Western Theological Seminary Holland, MI in May 1957. (Both are schools of the Reformed Church in America.) They served churches in Monarch Alberta, Canada (1957-1962), Nooksack Valley Reformed Church Nooksack, WA (1962-1969), and First Reformed Church Meservey, IA (1969-1976). He moved to Scarville, IA in the fall of 1976, and Harold worked at Deluxe (Fleetguard) in Lake Mills, IA as a tool and die maker for 15 years before retiring. During that time he preached in various denominations on Sundays.
He was survived by his wife: Dorothy Oppermann, 4 sons: Dan and wife Julie of Fayetteville, NC, Stephen and wife Camie of St. Louis, MO, Andrew and wife Laura of Mason City and Timothy. He has 5 beloved grandchildren: Adam (Mallory), Rachael, Leah (Klayton) Sara (Michael) and Matthew; and three step grandchildren: William (Melissa), Cory Siemon, and Elizabeth Gin. He has 5 beloved great grandchildren.
Two: brothers: Robert and his wife Lois in Doylestown, PA and Charlie and his wife Janet in Mountain View, AR. In-law: Mary DeWitt, Grand Haven, MI. and several nieces and nephews. His parents and three uncles preceded him in death.
He was a member of Classis Pleasant Prairie (RCA), and attended Rolling Acres Christian Reformed Church.

To send flowers to the family in memory of Harold Reginald Oppermann, please visit our flower store.