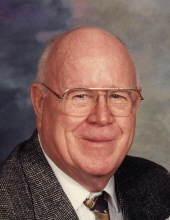 Harold Lloyd Younger, 94, of Nora Springs joined his wife, Erna and son, Fred in heaven on August 28, 2020. He had been at Good Shepherd Health Center since April 2016.

According to his wishes, his body was cremated. No services are planned at this time. Major Erickson Funeral Home and Crematory is in charge of arrangements.

Memorial donations can be directed to Judy Younger, 18037 Yarrow Ave., Nora Springs, IA 50458. Funds will be gifted to Music Man Square in honor of Harold Younger.

Born October 11, 1925 he was just 6 weeks shy of his 95th birthday when he passed. A native of Missouri, he joined the Army in May 1944 at the age of 18. He completed basic training at Camp Joseph T. Robinson, near Little Rock, Ark., and was transferred to the Trailblazers 70th Division in Fort Leonard Wood, Mo. Younger was only 19 when he sailed with the 70th division in December 1944, to Marseilles, France. He spent less than a month in combat before he was shot on a scouting mission on Jan. 9, 1945. He was awarded a purple heart for his service. After spending 13 months in military hospitals, he returned from Germany to settle in Omaha, NE. He earned a degree in accounting. While roller skating as therapy for his injured leg, he met Erna C Naumann. They married August 20, 1948 and had 2 children Susan Kaye Younger and Frederick Alan Younger. Harold had almost 40 years in the insurance business, which eventually brought him to Mason City. They moved to a farm near Nora Springs, Iowa in 1968 and where Harold sold Garst Seed Corn, after leaving the insurance business.

A devoted family man, a long-term member who previously served on the board of St. Luke Lutheran Church in Nora Springs and was part of their Friendly Circle and Golden Jubilee Organization. He was a guide at Music Man Square in Mason City and a jolly Santa for churches, schools and families. He was able to go on one of the Honor Flight to Washington DC for veterans of WWII and was a member of the American Legion Post 0449.

Harold was always an avid gardener. Family memories always include working with him in his garden, wonderful stories told around the family dining table, card games, especially pinochle and dominos. Wisdom and laughter were shared daily. He will be missed by daughter, Susan K. Younger, who lives in Dallas, TX; daughter-in-law, Judy Younger of Nora Springs; and grandson, Cole Younger, his wife Kaci, and their daughter, Mara, of Mason City.

To send flowers to the family in memory of Harold L. Younger, please visit our flower store.