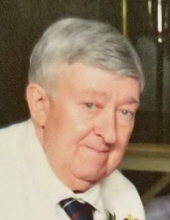 Harold “Jack” Lien, 81, of Mason City passed away Saturday, December 22, 2018 at his home surrounded by his family.

Visitation will be held one hour prior to services at the funeral home on Thursday.

Harold Jack Lien, the son of Harold and Zona (Bell) Lien, was born April 10, 1937 in Mason City. He graduated from Mason City High School in 1956 and continued his education at Mason City Junior College. After college, Jack was employed as a police officer in Mason City for a few years. On September 17, 1960 he married Karen Martinson. They made their home in Mason City where they raised their three children. Jack worked at the Mason City Post Office until his retirement. After retiring, he drove cars for several dealerships including Skinner Motors and Pritchard Auto Company. Jack enjoyed going to car shows, watching NASCAR, feeding birds, playing cards and taking care of his cats at home. He always had a home improvement project going to keep his house up-to-date and well maintained.

He was preceded in death by his parents; wife, Karen in 2010; and a sister, Sylvia “Kay” Flores.

To send flowers to the family in memory of Harold "Jack" Lien, please visit our flower store.