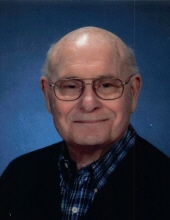 Harold D. Platts was born on May 31, 1931, in Mason City, to parents George and Gertrude (Aldrich) Platts. Harold grew up in Mason City and graduated from Mason City High School in 1950. In February of 1951, Harold joined the United States Navy and served for three years, being Honorably Discharged in April of 1954. Following his time in the Navy, Harold moved back to Mason City joining his father’s construction business GE Platts and Sons. In 1970, Harold purchased the business from his father changing the name to Platts Home Builders.

On August 17, 1951, on Treasure Island In San Francisco, Harold was united in marriage to Beverly Lux. The couple just recently celebrated 70 years of marriage. Between this union the couple had two children. Together they shared many joys in life, going to dinner every Friday night with their group of friends to traveling to London on 22 different occasions. Harold loved spending time with his family whether it be camping or travelling domestically.

He was preceded in death by his parents; daughter Barbara Wales; brothers Robert, William, Glenn Platts.

To send flowers to the family in memory of Harold D. Platts, please visit our flower store.