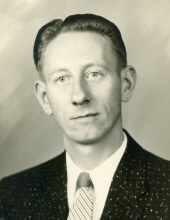 Hans Paarmann, 92, of Mason City, died on Wednesday, February 6, 2019 at the I.O.O.F. Home in Mason City. A funeral service will be held on Saturday, March 9, 2019 at 10:30 AM at Trinity Lutheran Church, 213 North Pennsylvania Ave, with Pastor Kathy Graves officiating. Interment will follow in the Riverside Cemetery, Rockford, Iowa.

Hans Paarmann was born on September 3, 1924 in Saarde, Estonia. He was born to Peter and Leena (Pari) Paarmann.

During WW II, Hans worked both as an airplane mechanic’s assistant as well as a hospital aide. He was especially proud of his work as a civilian with one of the United States Army Labor Units during the Berlin Airlift. Serving in this capacity for over 100 days, he was authorized to possess, and to wear, the Berlin Airlift Commemorative and Work Insignia.

At the age of 26 years, Hans traveled to the United States under sponsorship of the Lutheran Resettlement Service—National Luther Council arriving on November 29, 1950. Working for various farmers, he first settled in Ellsworth, Iowa and then moved to Rockford, Iowa where he became friends with several other individuals who settled there from Estonia. He eventually moved to Mason City, Iowa where he worked for Jacob E. Decker and Sons until his retirement in 1983.

In his young adult years, he enjoyed swimming in Clear Lake with his friends after a long shift at work. He fondly recalls enjoying the pie and ice cream served at the deli now occupied by the 1910 Grille in Mason City. While living in Mason City, he enjoyed having breakfast at Hardee’s, lunch at Pros Sandwhich Shop, playing BINGO at the Senior Activities Center, and his all-time-favorite pastime, playing Lottery pull tabs.

Hans had a sweet tooth and always welcomed a gift of cookies, cakes and candy bars. Hans had a large collection of photos he took during his travels to various countries and throughout the United States, and he enjoyed talking about the people and places in these photographs.
Hans continued keeping up with news from his home country through the receipt of an Estonian newspaper published weekly by Nordic Press. Written in the Estonian language, he would often interpret interesting stories to those of us who could not read the language and laughing at those of us who tried.

Hans was preceded in death by his father and mother as well as his brothers, Paul, Anton and Ilmer. He recalled that Ilmer was a wonderful violin player, and he so enjoyed listening to him play.

Hans was a quiet and reserved gentleman who expected little more than a kind smile from others in return for the smile he gave to them.

Hans had been living at the Nora Springs Care Center for the last few years where he enjoyed the company of his many neighbors and most recently at the IOOF Home in Mason City.

Hans was a lifetime supporter of the Estonia Relief Committee, Inc. Memorials can be sent to this organization at 243 East 34th Street, New York, NY 10016 or to Trinity Lutheran Church, Mason City, IA

Burial will take place at Riverside Cemetery in Rockford, Iowa, where Hans will be buried next to his many Estonian friends. Hans designed his headstone deliberately displaying both his parent’s names as well as those of his three brothers so that they could finally rest together under the Coat of Arms of Estonia.
Puhka rahus Hans.

To send flowers to the family in memory of Hans Paarmann, please visit our flower store.