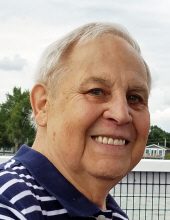 Glenn Borcherding, 82, died on Saturday afternoon, March 12, 2022, surrounded by family after over a decade battle with Alzheimer’s and Congestive Heart Failure.

A memorial service will be held at 11 AM on Thursday, March 17, 2022, at Major Erickson Funeral Home, 111 North Pennsylvania Avenue.

In lieu of flowers, the family requests memorials be sent to either of the following organizations that were dear to Glenn: The Spinal Muscular Atrophy Foundation, 970 W Broadway Ste #E, PMB 140, Jackson, WY 83001, or the Humane Society of North Iowa, 2700 South Birch Drive, Mason City, IA 50401, in honor of one of Glenn’s many four-legged friends.

Glenn was born April 2, 1939, in Sheffield, Iowa, in the house known as “the House of Seven Gables” to Harry and Esther (Eichmeyer) Borcherding. Harry was a laborer at the feed grinding store, and Esther was a full-time homemaker and baker extraordinaire. Glenn was a graduate of Mason City High School Class of 1957. Glenn married Donna Michels and together had three children, Jean (Mike) Wuertzer of Peosta, Iowa; Cindy (Bob) Long of Sheffield, Iowa; and Bob (Theresa) Borcherding of Cedar Falls, Iowa. Glenn married Susan DeSart Borcherding along with her two children, Scott Greeves and Leah Greeves, and were united in marriage for over 40 years together.
Glenn spent the majority of his career as a Paper Salesman. His work ethic of being hardworking, honest, and always ready to garnish a smile with a good joke was well known. Upon retirement, he was a bus driver for Mercy Hospital and enjoyed assisting with all the maintenance as well.
Glenn was a Cub Scout Leader, and a Member of the Masonic Temple Harding Lodge. He excelled at many hobbies, including spending summers at Lake Vermillion as an avid fisherman, golfing, and waterskiing. As the seasons changed, Glenn enjoyed slalom skiing and pheasant hunting. He also loved woodworking and refinishing antique furniture. Glenn had a soft spot for his beloved canine friends throughout his lifetime, beginning with Pal, Taffy, Fritz, Jiggs Katzenjammer, Maggie Boo, Corky, and Foxy. Glenn particularly enjoyed being a grandpa. Glenn and Susan are members of the First United Methodist Church.
Glenn was fortunate to have a short list of those whom preceded him in death to include his parents, Harry and Ester.
Glenn is survived by his wife, Susan; children Jeanne (Mike) Wuertzer; Cindy (Bob) Long; Bob (Theresa) Borcherding; Scott Greeves; Leah Greeves; grandchildren Mike (Erica) Wuertzer; Bailey (Stephen) Steenekamp, Britney Borcherding, Noah Borcherding, and Jordan Hardy; and, sister Barbara (Burton) TeKippe.
The family would like to thank Dr. Patrick Dunlay and Dr. Smitha Kanak, as well as all of the neighbors and friends who shared in supporting Glenn and Susan over the years.

To send flowers to the family in memory of Glenn William Borcherding, please visit our flower store.