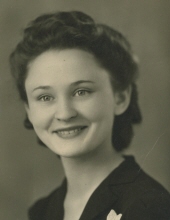 Memorials may be directed to a charity of your choice.

On August 5, 1921, Wayne and Hazel Sellon of Randolph, NE, welcomed their daughter Glenafa Rose Sellon. She attended the rural schools in the area and graduated from Randolph High School in 1938. After her high school graduation, the family moved to Nora Springs, IA.

Glenafa attended Iowa State Teachers College (UNI) for one year after which she taught in rural schools near Clear Lake and Nora Springs, IA. In 1942, she received a telegram from J. Edgar Hoover asking her to fill a position with the FBI in Washington, D.C. She worked with the FBI until 1945 when she was married to 1st Lt Lester F. Vrchota of the U.S. Air Corp. In 1947, Lester was honorably discharged from the Air Corp and the couple returned to Iowa where they made their home in Mason City.

Lester and Glenafa welcomed two daughters, Denise and Teresa. Glenafa was heavily involved in their daughters’ lives, leading Brownie and Girl Scout troops and teaching Sunday School. She also pursued additional education, eventually earning her BA in English from Drake University. She taught third grade in the Nora Springs-Rock Falls School System for 18 years, retiring in 1980. During their retirement, the couple pursued many interests and activities until Lester’s death in 1999. They travelled extensively both in the United States and internationally; maintained a large garden; were active members of organizations such as Eastern Star and White Shrine, Wesley United Methodist Church, and Camera Club; volunteered for numerous worthy initiatives; drove throughout Iowa to participate in square dancing; and most of all, enjoyed their grandchildren.

Glenafa continued living in her home until she was 92 when she moved to the Legacy Apartments in Mason City. She resided at the Nora Springs Care Center until her death.
She was preceded in death by her husband, Lester; her parents, Hazel and Wayne Sellon; her mother-in-law, Mary Vrchota; brothers Eugene Sellon and Keith Sellon and his wife, Shirley Sellon; in-laws Curtis and Verna Vrchota and Roy and Lillian Vrchota; nephews Steve Sellon, Bruce Vrchota and Gerald Sellon.

To send flowers to the family in memory of Glenafa R. Vrchota, please visit our flower store.