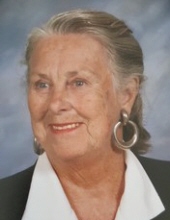 Gladys May de Buhr, 93, of Mason City, passed away on Monday, November 9, 2020 at the Good Shepherd Health Center in Mason City.

Services will be scheduled for a later date.

In lieu of flowers, the family requests a donation in Gladys’ name to Make-A-Wish Iowa, iowa.wish.org.

Glady, as most people knew her by, was born on February 11, 1927 in Southport Lancashire, England to parents Oscar and Cissie (Horrocks) Edwards. Gladys graduated from Holy Trinity Girls School. When Glady was 19, she met her first husband, William (Bill) Griffith, while he was serving in the U.S. Army during World War II. They married in Southport, England and she came over by ship to live in the U.S. Glady went to Secretary School and Medical Secretary Training, and then attended University of Minnesota for classes, including Braille Transcribing. She volunteered transcribing textbooks for children while living in Minneapolis, MN.

Glady and Bill had two children, Gregory and Pamela, who moved along with them to several states, including Montana in the 1960s. In the early years, she was a traditional stay-at-home mom, dedicated to her family. Glady and family lived in many cities around the U.S., and in the late 1960s, settled in Mason City, Iowa where she has lived ever since.

Gladys was married to her second husband, Alfred (Al) de Buhr on April 26, 1971, and together, they owned and operated Risto, Inc. in Mason City, until her retirement in 1989. Glady also helped to raise her grandson Matt during this time.

Gladys was an active member of St. John’s Episcopal Church, where she spent many years volunteering as a fellowship committee member and altar guild member. She was a Cub Scout Leader and member of the Antique Auto Club. She could often be seen zooming around Mason City in one of her classic MG sports cars, or driving them in the Band Festival parade.

To send flowers to the family in memory of Gladys M. de Buhr, please visit our flower store.