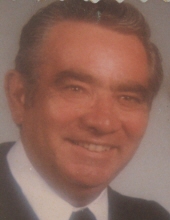 Burial will be held in the Park Lawn Cemetery, Kansas City, MO at a later date. Memorials may be directed to the family of Pat Svejda.

Gerald Patrick Svejda was born on October 6, 1932, in Pocahontas to parents Henry and Mary (Clarken) Svejda. Pat grew up in Laurens, Iowa attending school in the Laurens School District. Pat joined the United States and served in the Korean War. He was honorably discharged. After being discharged from the Army Pat worked as a carpenter for his father in-law later moving to Kansas City, Missouri where he and his brothers started a Furnace and Air Conditioning business.

He was preceded in death by his parents; wife, Edna; siblings, Ray, Hank, Dennis Svejda, Evelyn Olsen and Joann Gehres.

Mike, Kim and the grandchildren would like to extend their thanks and appreciation to Michelle for her willingness to take on the role of being a caretaker for Pat for the past eight years.

To send flowers to the family in memory of Gerald Patrick "Pat" Svejda, please visit our flower store.