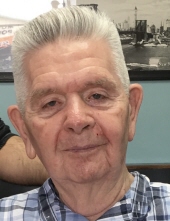 George Lindsey Lane died peacefully on November 5 at the Good Shepherd Care Center in Mason City, Iowa at the age of 86.

George's wife, Vivian, and daughter Lorrie Lala, and son Greg Lane, were able to be with George in his final hours to express their love to him. In addition to a husband of 64 years to Vivian and father to Lorrie and Greg, George was grandparent to four grandchildren, brother to four sisters and the son of George and Earla Lane who raised their family in East St. Louis.

After high school, George served in the United States Airforce as a Weather Operator and after serving four years went on to get his Bachelor's and Master's Degrees in Education and School Administration. George taught 6th grade and served as a Principal at elementary schools in New Berlin, IL and Illinois City, IL and then went on to serve as the Rockridge High School principal in Edgington, IL from 1980 to 1993. After retirement, George and Vivian moved to Springville, TN and then Paduchah, KY where they lived until relocating to Mason City, IA in 2018 to be closer to family.

George was loved by many and repeatedly cited as one of the most influential principals to many, many high school students. George loved serving as a principal and often reminisced about his time at Rockridge High School. George was also very proud of his children and grandchildren, and often boasted of their hard work to earn degrees and professions in challenging fields of study. George and Vivian faithfully loved and cared for each other through George's years of military service, his studies and career in education, parenting two children and grandparenting four grandchildren, up through retirement and until his final days. His family and loved ones continue to carry on his legacy through their memories and love of George Lindsey Lane.

Vivian, Lorrie and Greg would like to thank everyone who has reached out to share their condolences and memories of their beloved husband and father.

A military service will be performed at the Arsenal Island in Rock Island, IL at a later date.

To send flowers to the family in memory of George L. Lane, please visit our flower store.