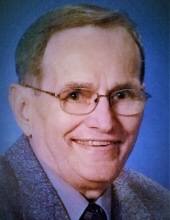 Visitation will take place one hour prior to the start of the service.
Memorials may be directed to Community Kitchen or Meals on Wheels, 606 N Monroe Ave.

George Henry Rogers was born on November 14, 1936, in Fayette, Iowa, to Austin and Gladys (Schlatter) Rogers. He grew up in Fredericksburg and graduated from high school there in 1955. George married Donna Briggs on August 8, 1958, in Nashua at the Little Brown Church. He worked at Meinerz Creamery/Beatrice Foods for over 40 years. After his retirement, he and his wife moved to Mason City. He was a member of St. John's Episcopal Church and volunteered for several years for Community Kitchen and Meals on Wheels.

He was preceded in death by his parents and 2 brothers, Ronald and Gerald.

To send flowers to the family in memory of George Henry Rogers, please visit our flower store.