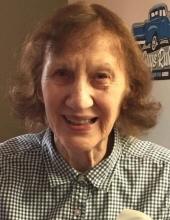 There will be a private family graveside service.

Services will be livestreamed on the Major Erickson Funeral Home Facebook page at 1 p.m. on Monday, November 23, 2020.

Genielle Marie Henry was born in Albert Lea, MN on November 8, 1933 to Philip and Mabel (Stoen) Henry. She graduated from Albert Lea High school and attended Hamilton Business college in Mason City. She was employed as a telephone operator and supervisor with Northwestern Bell for 30 years. Genielle retired from Northwestern Bell and went on to work another 20 years for ShopKo stores. She was a member of Trinity Lutheran Church and worked in the church nursery for several years.

Genielle, or “Jen” as she liked to be called, met her husband, Peter Mariner, shortly after moving to Mason City. They were married on June 19, 1954 and celebrated their 66th wedding anniversary this year. They were an adoring couple who delighted in working together to build their home and family life. Jen and Pete were blessed with two children, Debra and Michael. Jen was a whirlwind as a young wife and mother, maintaining an immaculate home and cooking scrumptious meals while working full-time. She doted on her husband and children and poured her heart and soul into creating a warm, loving family life. Jen was delighted when she became a grandmother. She was a dedicated grandma who loved spending time with her granddaughters, lavishing them with attention and affection. “Grandma Jen” imparted a lasting legacy that will live on through memories of her stories, signature recipes, and boundless energy.

She was preceded in death by her parents, brothers Phil, Bob, and Tom Henry; sisters Phyllis Kedziora and Sharon Offenhauser.

To send flowers to the family in memory of Genielle M. Mariner, please visit our flower store.