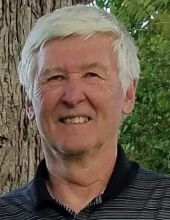 Memorial services will follow at 11:00 am, with Pastor Kathy Graves officiating.

In lieu of flowers, memorials may be directed to the Gary L. Kostka memorial fund.

Per family wishes casual dress of camouflage attire is requested.

Gary Leonard Kostka was born August 4th, 1948, in Cresco, Iowa, to parents Leonard and Gladys (Mrachek) Kostka. He attended elementary and junior high school in Charles City. Gary graduated from Mason City High School in 1966, where he was a record setting hurdler. He attended NIACC in 1976.
Gary was united in marriage to Lynn Fuller for 20 years and together they had three children – Benjamin, John, and Megan. In 1999, Gary married Jan Paulson Ewing, to whom he was married 19 years.
Gary worked for the Iowa Highway Commission, among other jobs, before beginning his career with the City of Mason City. He retired after 32 years of service in 2011.
Gary was a passionate outdoorsman. He was very skilled at hunting deer and turkey, and also enjoyed fishing and camping with his family. Gary had also found pleasure in raising, training and showing generations of national Best of Show Brittany Spaniels.
Gary competed in a variety of national, state and local archery shoots, earning numerous awards. In 2015 and 2016 he earned first place in the National Field Archery Association competition. He held offices on the Iowa State Archery Association and the Mason City Mohawk Archery Club, where he volunteered by teaching archery lessons to local youths. He devoted years of his time serving as treasurer for the local chapter of the National Wild Turkey Federation. Gary and Jan were avid pickleball players and enjoyed competing in local and state events.
As an all-around handy man, he could fix or build just about anything. He loved the thrill of planning and executing projects of all kinds. Gary constructed a second story addition to his first home. He built decks and did roofing projects for other people, as well as several additions to his current home. Most recently, Gary transformed a garage into a one-of-a-kind art studio for his wife.
Most importantly, Gary will be remembered as a loving and supportive husband, father, and grandfather of ten.
Gary is survived by his wife, Jan, children: Benjamin (Kaitlynn) Kostka, John (Micki) Kostka, Megan (Rob Dietz) Kostka. His step-children: Kayde (Jared) Sberal, Brittany (Will) Davis. His brother James(Dori) Kostka. As well as his grandchildren: Noah, Alexis, Ava, Curtis, Emma, Karlee, J.D., Hadley, Colten, Beau. His aunt, Grace Lienhard, and many cousins.
Gary was preceded in death by his parents.

To send flowers to the family in memory of Gary Leonard Kostka, please visit our flower store.