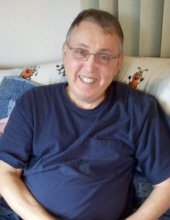 Memorials may be directed to the family of Gary Christiansen.

Gary was born on June 17, 1945 to parents Clarence and Evelyn (Miller) Christiansen in Mason City, Iowa. He graduated from Mason City High School in 1963 and Mankato State University, recieving his BA in Business in 1967. Gary was employed at Wilson’s Processing Plant in Data Process Managing in Albert Lea, MN, until they closed; after that he started working as a controller at Universal Manufacturing in Algona, Iowa. Later on, Gary moved to Mason City and worked a variety of jobs, most recently, HyVee until his retirement.

Gary is survived by his sisters, Linda Defenbaugh and Julie Harms; and nieces and nephews.

Gary was preceded in death by his parents, Clarence and Evelyn.

To send flowers to the family in memory of Gary L. Christiansen, please visit our flower store.