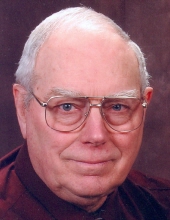 Gary G. Faught, 85, of Mason City, IA, died Tuesday, January 2, 2018, at the Muse Norris Hospice Inpatient Unit. A gathering will be held from 4:00 PM to 7:00 PM January 8, 2018 at Major Erickson Funeral Home, 111 N. Pennsylvania Avenue. In Lieu of flowers memorials may be directed to the family of Gary Faught.

Gary Gilbert Faught, the oldest child of Audrey and Dorothy (Zorn) Faught was born on December 25, 1932, at his grandparents’ home in Mason City, Iowa. He graduated from Lime Creek #4 country school and then Mason City High School with the class of 1951. He joined the US Navy in March 1952 and graduated from Electrician Mates School at Great Lakes Naval Base in Illinois. He was assigned to the aircraft carrier USS Yorktown and made two cruises to Korea. In March 1956 he was honorably discharged with the rank of EM1. He often recalled his navy days and visits to various Pacific ports.

After his discharge he returned to Mason City and attended Mason City Junior College (NIACC). This was followed by graduation from the University of Northern Iowa with a teaching degree in math and physics. He taught for four years at Glidden-Ralston and then for 31 years at Mason City. He also furthered his education by receiving a Masters of Science Degree for Teachers in 1970 from Cornell University in Ithaca, New York. He enjoyed teaching middle and high school students with an approach combining hard work and his trademark humor until his retirement in 1995.

He was united in marriage to Deloris Hansen on March 15, 1957 at St. Peters Lutheran Church in Rockwell, Iowa. They became the parents of two daughters, Diane and Debra. Gary enjoyed helping on the family farms and watching his daughters’ and later his grandsons’ school activities. His hobbies included coin collecting, watching the Iowa Hawkeyes, and discussing the world’s problems when “walking” at the mall. In recent years, the highlights of each week were dancing every Wednesday at the Senior Center and having breakfast on Thursdays with his retired teachers group.

He was preceded in death by his parents Audrey and Dorothy Faught; brother David Faught; daughter Debra Faught; and grandson Nathan Quail.

To send flowers to the family in memory of Gary Gilbert Faught, please visit our flower store.