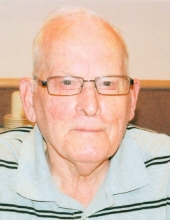 Gailerd Ellwood Erickson, 95, died Sunday, November 12, 2017 at the Lodge of Ashworth, West Des Moines, IA. Memorial services will be held at 11 AM Wednesday, November 15, 2017 at Trinity Lutheran Church with Rev. Kevin Jones officiating. Inurnment will follow in the Elmwood-St. Joseph Cemetery. Military honors will be conducted by the Mason City Veterans Association. There will be a gathering of friends and family one hour prior to service time at the church. In lieu of flowers, memorials may be directed to Hospice of Central Iowa, 3000 Easton Blvd., Des Moines, Iowa 50317.

Gailerd was born August 5, 1922 the son of Gailerd E. Erickson Sr. and Melva (Michelson) Erickson in Pequot, Minnesota. On June 10, 1947 Gailerd was united in marriage to Jean J. Radcliff in Mason City. To this union, three children were born.

In his early years, he lived and attended school in Britt and Kanawha. In 1942, he enlisted in the Navy serving during WWII in the Pacific theater. He achieved the rank of Boatswain’s mate 2nd class. He was honorably discharged following the end of the war and moved to Mason City. Shortly after moving to Mason City, he walked into Wolf’s Furniture Store where he met the love of his life, Jean. They were happily married for 62 years. Gailerd was employed at Kelroy Plumbing and Heating as a sheet metal worker where he worked for 34 years before retiring in 1979. At one time, he served as president of the Sheet Metal Workers Union #33.

In retirement, he volunteered at the Hawkeye Harvest Food Bank for many years. Gailerd was a member of the American Legion and VFW. At the time of his death, he was the longest tenured member of the Mason City VFW (73 years).

For many years, Gailerd enjoyed walking with his faithful canine companion, Ellwood. He also enjoyed fishing, gardening, and playing cards.

In 2013, Gailerd moved to the Lodge of Ashworth in West Des Moines. While there, he made many wonderful friends and won many free meal tickets with his card playing skills.

To send flowers to the family in memory of Gailerd Ellwood Erickson, please visit our flower store.