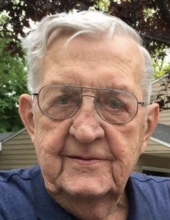 Fritz Erich Werner Thoerner, 93, of Mason City, died on Tuesday, February 26, 2019, at the Good Shepherd Health Center in Mason City, Iowa. Interment will be at Elmwood-St. Joseph Cemetery and a private family service will be held at a later date.

Fritz, son of Friedrich Thörner and Erna (Helmke) Thörner, was born on September 10, 1925 in Berlin-Friedrichshagen, Germany. In September 1950 he immigrated to Iowa.

Fritz became a United States citizen and graduated in 1956 from Iowa State College with a Bachelor of Science in Civil Engineering. He was united in marriage with Marlene Mae Guthrie on June 16, 1956 at the First Methodist Church in Ames, Iowa.

After working for ten years for Stanley Consultants in Muscatine, Iowa, the couple moved to Mason City in 1966, where Fritz was in charge of highway design work for WHKS & Co. until his retirement in 1995.

His later years involved traveling, playing golf, downhill skiing, visiting his children and grandchildren, and was an avid bridge player as a member of several different bridge clubs.

Fritz was a member of Trinity Lutheran Church and belonged to the American Society of Civil Engineers, the National and Iowa Societies of Professional Engineers, and was a lifetime member of the Iowa State University Alumni Association.

Fritz was preceded in death at a young age by his parents and only brother Gerhard, all of Berlin, Germany; and his wife, Marlene Thoerner, of Mason City.

To send flowers to the family in memory of Fritz Erich Thoerner, please visit our flower store.