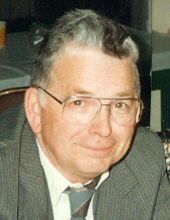 Frederick J. Humphrey, 86, of Mason City, IA, died Sunday, December 17, 2017, at Mercy Medical Center – North Iowa. Memorial services will be held at 2:00 PM on Saturday, January 6, 2018, at Wesley United Methodist Church, 1405 S. Pennsylvania Avenue, with Rev. Steve Hansen officiating. Military honors will be conducted by the Mason City Veterans Association. A gathering of family and friends will be from 12:30 PM - 2:00 PM at the church. Inurnment will take place in Elmwood-St. Joseph Cemetery at a later date. Memorials may be directed to the NIACC Foundation in memory of Fred Humphrey (to benefit accounting students), 500 College Drive, Mason City, IA 50401, Wesley United Methodist Church, or the donor’s choice.

Frederick James was born August 12, 1931, at the family farm house near Arlington, IA, the son of Edwin Dale and Helen Fern (Hetzel) Humphrey. He started country school but moved to Manchester, IA when he was 6 years old. After a year in Manchester, his family moved to rural Arlington, IA, where Frederick attended country school through 5th grade. His family then moved to Wadena, IA where he continued his education through high school. Following graduation, Fred worked at Rath Packing Company for a year before joining the U.S. Navy in August of 1950. He was honorably discharged in June of 1954, with rate of Aviation Storekeeper 2nd Class. On November 13, 1953, Fred married Beverly Robbins, while home on leave from the Navy. They had met earlier at a dance in Oelwein, IA. Following his discharge from the Navy, Fred attended Iowa State Teachers College while his wife worked as a key punch operator at Mutual Fire and Auto Insurance. He received his degree in 3 years by taking extra classes and attending summer school. He graduated in June of 1957, with honors. He also received Purple and Old Gold Awards for meritorious scholarship in Business Education. He received his MA degree from State College of Iowa (formerly Iowa State Teachers College) in 1960. In November of 1970, he passed his CPA exam and received an award for Outstanding Candidate in Iowa. Fred taught business education at New Hartford (1957 – 1960), business education at Mason City High School (1960 – 1966), and accounting and business law at NIACC (1966 until his retirement in May of 1999). He was employed part-time as Treasurer ACE Credit Union (1967 – 1976). In 1995, Fred received the Iowa Distinguished Teachers Award from the University of Iowa. Fred became of member of Wesley United Methodist Church in November of 1960.

He was preceded in death by his parents: Edwin and Fern Humphrey; grandparents: Fred and Polly Hetzel; Harry J. and Alice Humphrey; sister: Rosaltha Kiefer; and 2 brothers: Edwin Humphrey Jr. and Richard Humphrey: and his daughter-in-law Peggy Humphrey.

To send flowers to the family in memory of Frederick James Humphrey, please visit our flower store.