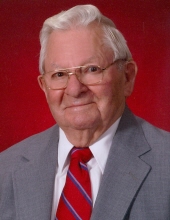 Fred was preceded in death by his parents, 4 brothers, George, Bernard, Bruce and Burdett and 1 sister Trudy.

Fred was born August 4, 1922 in Strawberry Point, IA to Fred and Gertrude (Pilgrim) Fenchel.
He graduated from Strawberry Point High School and furthered his education in specialized training courses with the military service. He was a WW II veteran, serving his country for 5 years, with assignment from the United States Navy to the 14th Anti-Aircraft Battalion, 32nd Replacement Battalion and the 2nd Marine Division Medical Corps.

On May 4th, 1952, he married the love of his life, Ila Mae Klink at the Peace Evangelical and Reform Church, in Elkader, IA.

Following his time in the military, he became a sales promotion manager for The Quaker Oats Company of Cedar Rapids, for 10 years. The family then moved to Mason City in 1959. In 1960, a long association began with Metalcraft, Inc. where he was the advertising manager for 28 years retiring in 1988. In addition to his employment with Metalcraft, he and Ila Mae established the Fred T. Fenchel Entertainment Agency in 1964 and continued as a thriving business until his full retirement.

Fred was very active in the community, which he took great pride in, with memberships including, Wesley United Methodist Church, Scottish Rite of Freemasonry, Benevolent Lodge No. 145, AF&AM, El Kahir Shrine Temple of Cedar Rapids and a past active member of the North Iowa Shrine Club and Clown Unit, Mason City Chamber of Commerce where he was a Ambassador since 1960 and was recognized as the longest serving member in 1996, but continued his association with the Ambassadors until his passing.

He was a member, board member and past president of the River City Kiwanis Club, member of North Iowa Fair Association for over 35 years where he served on the Board of Directors, the Association of Iowa Fairs and the Minnesota Federation of Fairs. He served as Chairman of the Board for 25 years for the Elmwood-St. Joseph Cemetery in Mason City.

In 2004, Fred was inducted into the Iowa Rock and Roll Hall of Fame for the work of his Entertainment Agency.

During all of the years in Mason City, he served on numerous committees and participated in many fund-raising campaigns. He also was proud of having served on the Board of Directors for the Mason City Community Theater and loved every moment of playing the role of Mayor Shinn in the 1968 production of “The Music Man”. Every year he participated on several committees for the annual North Iowa Band Festival. In October 2017, he and Ila Mae were named Grand Marshals for the 2018 Festival.

As busy as he was with his community involvement, his first priority was his family. He was a generous and giving man, not only to his family and friends but to Mason City as well. He was a man full of pride, integrity and love. He will be dearly missed by his family and friends.
In lieu of flowers memorials, may be directed to Muse-Norris Hospice Inpatient Unit, 232 2nd St. SE, Mason City, IA, 50401 or Wesley United Methodist Church, 1405 S. Pennsylvania, Mason City, IA 50401.

Fred’s family wishes to express their heartfelt thanks for the compassionate and professional care given to him in his final days by the Muse-Norris Inpatient Hospice Unit.

To send flowers to the family in memory of Fred T. Fenchel, please visit our flower store.