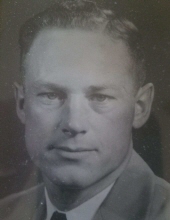 Francis Eli Holland, 94, of Mason City, died Wednesday, August 23, 2017 at the Good Shepherd Health Center, where he had been living since suffering a fall on July 30th. Memorial services will be held 11:00 AM Friday, September 1, 2017 at Wesley United Methodist Church, 1405 S. Pennsylvania Avenue with Rev. Steve Hansen officiating. Per family request, the body has been cremated. The family will greet friends from 4:00 to 6:00 PM Thursday, August 31, 2017 at Major Erickson Funeral Home, 111 N. Pennsylvania Avenue. Masonic services will be conducted by Harding Lodge #649 A.F. & A.M. at 6:00 PM at the funeral home. Memorials may be directed to the Francis E. Holland Memorial Fund where the family will establish a memorial to be named at a later date.

Francis was born August 14, 1923 on his grandparent’s farm in Brayton, Iowa, the son of Carl and Minnie (Hansen) Holland, the 3rd of 5 boys. He was raised on a farm near Anita, Iowa, his father having emigrated from Denmark at the age of 17. Danish was his first language. More recently many were thanked in Danish and treated to a Danish solo of “You Are My Sunshine.”
Francis attended and graduated from Anita High School in 1940. From 1941 to 1943 he worked for Lockheed Aircraft in Hollywood, California. Francis then enlisted in the US Army Air Corp. He served in Alaska during WW II attaining the rank of Sgt. From 1946 -1956, he served in the U.S. Army Crop Reserves attaining the rank of Lieutenant. He graduated from Iowa State University in 1949 with an Engineering Degree. On December 23, 1950, he married Lora Belle Lohr in Lohrville, Iowa. For 2 years, Francis worked for the U.S. Bureau of Reclamation, Denver, Colorado. Francis moved to Mason City in 1952 where he began a 32 year career as a civil engineer and land surveyor with Wallace Engineering. Francis became a partner in the firm, and with the addition of 2 more partners, the firm became Wallace, Holland, Kastler, Schmitz, and Co. (now WHKS). Francis retired in 1985. One of his many accomplishments was buying a farm south of Mason City and developing the subdivision of Fair Meadows. Francis and Lora built the first house there in 1965 and lived there for 24 years.

Francis was a member of Wesley United Methodist Church, Pleasant Ridge Club, Harding Masonic Lodge, High Twelve, White Shrine, and York Rite where he held many leadership roles. He was a 60-year member of Rotary and The Boy Scouts of America. He was involved in the Chamber of Commerce, YMCA, United Way and many other community projects such as Prairie Playground and the Mason City Aquatic Center. He was also past president of the Iowa Engineer Society, Consulting Engineers of Iowa, Society of Land Surveyors and a member of the State Board of Engineering Examiners and National Council of Engineering Examiners. Francis was a past board member of Interstate Power.

His passions included his family, fundraising, education, woodworking, travel, being an airplane pilot, playing cribbage and having coffee with friends, enjoying nature, hunting and fishing at the Timber and at his cabin near Ely, MN. Throughout the last few years, Francis was losing some of his mobility and suffered from dementia. But he always, always had a kind and laughing demeanor with an ever-present smile. He was a great man and will be missed by many.

To send flowers to the family in memory of Francis E. Holland, please visit our flower store.