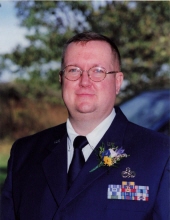 Floyd David Easley, 72, of Mason City, IA passed away Monday, December 5, 2022 at MercyOne Medical Center North Iowa. Funeral services will be held at 11 AM Saturday, December 10, 2022 at Major Erickson Funeral Home, 111 North Pennsylvania Ave, with the Rev. Neil Manternach officiating. Military honors will be conducted by the Mason City Veterans Association. Visitation will be held one hour prior to service time.

Dave was born December 5, 1950, in Mason City. The son of Floyd and Janice Easley of Mason City. He Married Loretta Deeds in Des Moines. They had one son Natheniel (Nate) Easley of Des Moines.

Dave joined the Air Force in 1972. His favorite place that he was station at was Okinawa, Japan. When he got out of the Air Force, he enjoyed being a manager of several shoe stores. Later he joined the Iowa Air National Guard in Des Moines. He served his country for several decades. He enjoyed seeing several countries: Germany, Turkey, Afghanistan, Puerto Rico and many more. When he retired from the Guard, he moved back to Mason City and joined Kraft Foods before he retired from the work force.

He loved history, especially the Civil War. He could talk about that for hours. He loved fishing and the Iowa Hawkeyes.

He was preceded in death by his father Floyd; his wife, Loretta; and a great niece.

To send flowers to the family in memory of Floyd D. Easley, please visit our flower store.