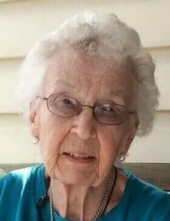 Memorial service will be held at 10:30 AM Saturday, November 10, 2018, at Major Erickson Funeral Home, 111 N Pennsylvania Ave. Inurnment will follow in Memorial Park Cemetery. Visitation will be held one hour prior to services.

Florence grew up on a farm 8 miles southeast of Mason City. She loved to reminisce about her days at Mason #7 country school. The high life of her social time was the Pleasant Ridge Club. Her love of 4-H started as a young girl in the Mason Thrifty Fixers 4-H Club. Florence was a member of the Mason City High class of 1944. She obtained her home economics degree at Iowa State College, now Iowa State University. Following graduation, she began her teaching career in Rolfe, Iowa. While teaching in Rolfe, she met a handsome veteran, Gene at the Saint Patrick’s Day dance. She married Gene Ferden on May 12, 1951 at the Basilica of St Mary in Minneapolis. The couple moved to Manly in 1954, where she became the Worth County Home Economist. Florence had a passion for Worth county families and 4-H for her 32 year career. She is remembered for her wealth of knowledge about home economics and offered a number of trainings, workshops and education for a large number of winning 4-H demonstrations. Florence’s work was recognized as the R.K. Bliss State Extension award winner in 1979. In 1981, she became Worth County Extension Director, the first female to serve in this role in the State of Iowa. In 2013, she was inducted into the 4-H Hall of Fame.

While she had an award winning career, her true pride and joy was her family. Florence made her family her top priority while balancing a career. Her children fondly remember her rushing home to attend school events, making sure dinner was on the table every night, and running a tight ship at home. After her children were grown she took on the treasured role of grandmother. Her grandchildren remember hikes at the Lime Creek Nature Center, walks to Manly Public Library, baking lessons with freshly picked strawberries, middle of the night trips to look for shooting stars and her infamous lefse. During her retirement, Gene and Florence traveled extensively in their Winnebago motorhome throughout the country. They were particularly fond of their tour of Alaska during the summer of 1993. They also visited Canada, Mexico, Panama Canal, Norway, Germany, Switzerland, France, Italy and the Netherlands. They also spent countless hours volunteering for many local organizations in the Manly and Mason City area, always wanting to give back and help.

Florence is preceded in death by her parents, Severt and Mary Mathre, a brother, Richard (Dick) Mathre and two brother-in-laws, Robert Biederman and Delbert Watson, as well as two nephews, Philip and David Biederman.

She is survived by her husband of 67 years, Gene Ferden. Her children; Alan (Doreen) of Waterloo, Ann (Dean) Yezek of Manly, Peter (Priscilla) of Bastrop, Texas, Mary Harris of Story City and John (Gina Perri MD) of Swisher. Her 16 grandchildren, 20 great children and 2 great-great grandchildren. Her sisters; Jean Biederman of Osage, Mary Ann Watson of Clear Lake, brother, Roger Mathre (Pat) of Nora Springs and sister-in-law, Nadine Mathre of Nora Springs, as well as many nieces and nephews.

To send flowers to the family in memory of Florence M. Ferden, please visit our flower store.