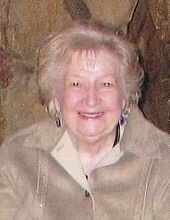 Evelyn Holman, 95, of Mason City, passed away peacefully under hospice care on Sunday, September 22, 2019 at the IOOF Home in Mason City. A memorial service will be held on Friday, October 11, 2019, at 2:00 p.m., at Major Erickson Funeral Home, 111 North Pennsylvania, with Pastor Dave Byrd, Chaplain of the IOOF Home, officiating. She will be laid to rest at Memorial Park Cemetery.

Evelyn was born November 1, 1923 in Marshalltown, Iowa to John and Margaret (Knab) Frost. She attended schools in Marshalltown and Mason City. She was united in marriage to John Holman in October of 1940. To this union five children were born. This marriage lasted until her husband's death in May of 1974.

Evelyn was a homemaker for most of her life, but did enjoy working for a brief time at Merkel's department store prior to her marriage and in the kitchen at the IOOF home for a few years following her husband's death. She was a former member of Open Bible Church and her faith was very important to her. She had a wonderful sense of humor and enjoyed making friends and family laugh. She also had a great sense of style and enjoyed different hairstyles, colors, jewelry and fashion. She enjoyed cooking and baking, music and dancing, bowling, golf, traveling with her sisters and daughters, playing bingo, and she was an avid reader.

To send flowers to the family in memory of Evelyn M. Holman, please visit our flower store.