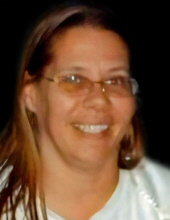 Eunice Elaine Follmuth, 53, of Rockwell, passed away Friday, January 18th, 2019 at home, surrounded by her loving family, after losing a brief but hard-fought battle with cancer.

A memorial service will be held at Messiah Lutheran Church in Charles City on Saturday January 26th at 2:00 p.m., with visitation one hour before the service and reception following the service.

Eunice Elaine Mohring, the daughter of Otto and Betty (Mulder) Mohring, was born November 10th, 1965 in Charles City, Iowa. In January 1966, Eunice became the first baby baptized at Messiah Lutheran Church, where she also confirmed her faith. She was a 1984 graduate of Charles City High School.

Eunice married Steve Merrill on May 17, 1985. To this union, two children were born, Eric and Sara. She then found her soulmate in Jeff Follmuth and they were wed August 13th, 2003 in Mason City.

Eunice love traveling across the country on 18 wheels with her true love Jeff. Together they traveled to all 48 continental US states numerous times with millions of miles between them. Eunice loved her work, making numerous friends along the way and assisting everyone that needed help. She also had many interesting stories about where they had been, where they were going, which casinos they stopped at and the interesting sites along the way.

When at home, Eunice love spending time with her family and friends. Mom always made time to be with her parents, children and grandchildren. She loved finding herself in an adventure with family, whether walking many miles and circles around Minneapolis, watching her grandchild play at a park, or trying new foods at different restaurants. Eunice also loved the time riding around on her Harley Davidson with Jeff and they took many trips throughout the area, including South Dakota, Minnesota, and Wisconsin.

Eunice will be greatly missed by all the people that she had touched and loved. We'll always remember her for her highly infectious laugh or for the times she comforted us when we needed someone the most.

She was preceded in death by her grandparents, and father, Otto Mohring.

To send flowers to the family in memory of Eunice E. Follmuth, please visit our flower store.