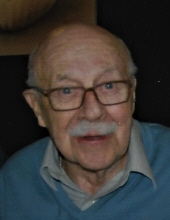 A Mass of Christian Burial will be celebrated at 10:30 a.m. on Tuesday, March 10,
2020, at Epiphany Parish Holy Family Catholic Church, 714 N. Adams Ave., with the
Rev. Neil Manternach as celebrant. Visitation will be held at the Church for thirty
minutes prior to the Mass. Interment will follow at Elmwood-St. Joseph Cemetery.
The Mason City Veterans Association will conduct military honors.

Gene was born to Edward M. and Mary (Mergner) Pfeifer on August 5, 1925, in Durbin,
North Dakota. He was raised on the family farm with his four older siblings. Gene
enlisted in the Navy in 1943 and served as a Petty Officer and radioman in the
Pacific Theatre during World War II, seeing action at Iwo Jima and Okinawa. In
1950, he was recalled to active duty and again served his country during the Korean
War. He also served in the North Dakota Air National Guard’s 119th Fighter
Squadron for three years in the late 1950s.

Gene married Marilyn Moffet on November 10, 1951 in Mooreton, North Dakota. After
graduating from Moorhead State College in 1958, he taught high school social studies
in Hankinson, North Dakota. In 1965, Gene received his Masters degree from North
Dakota State University and moved to Mason City and taught U.S. Government at Mason
City High School until his retirement in 1988.

A proud veteran, Gene was an avid collector and reader of books about World War II
and the Korean War. After his retirement, Gene enjoyed speaking at student forums
about his military service. He also helped organize numerous reunions of his
shipmates from the U.S.S. Makassar Strait. Gene was a life member of both the
American Legion and Veterans of Foreign Wars.

Gene enjoyed cheering on the NDSU Bison and Green Bay Packers. He was also a Big
Band enthusiast and enjoyed listening and dancing to music from the era. In
addition to the many winters they spent in Texas, Gene and Marilyn enjoyed traveling
and visiting family and friends during their retirement.

Gene was preceded in death by his wife, Marilyn, his parents, three brothers and
sister, and his granddaughter, Hannah Pfeifer.

To send flowers to the family in memory of Eugene V. Pfeifer, please visit our flower store.