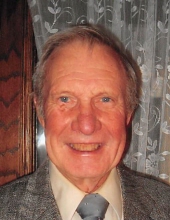 Memorial services will be held at 2 PM Saturday February 19, 2022 at the Prince of Peace Lutheran Church, 670 12th St. NE, with Pastor Robert Harting officiating. Inurnment will take place at a later date in Elmwood-St. Joseph Cemetery. Visitation will be held from 5 until 7 PM Friday, February 18, 2022 at the Major Erickson Funeral Home, 111 North Pennsylvania Ave. Memorials may be directed to the Lime Creek Nature Center or the Mason City Public Library.

Eugene was born April 29, 1930 the son of William and Reba (Taylor) Smith in Rural Forest City, Iowa. He attended and later graduated from Forest City High School. Following high school, Eugene enlisted in the United States Army serving his country from January 30, 1952 until his honorable discharge on January 29, 1954. On October 15, 1954 Eugene was united in marriage to Shirley Fredrickson in Forest City, IA. The couple then made their home in Mason City. Eugene began his plumbing career with Payne Plumbing and heating and with a few jobs in between ended up retiring with Clausen Plumbing and Heating.

Eugene loved the outdoors, especially camping in the mountains of Montana and Wyoming. His adventurous spirit and his love of hiking made for beautiful memories of their camping excursions. His passion for fishing lead to numerous trips to Canada. Eugene was known to go on long walks, one was only tricked once in going with him as he would walk several miles before returning home. He was an avid reader of Western Novels along with other great books of choice. Eugene was a longtime member of the Prince of Peace Lutheran Church and a life member of the Plumbers and Steamfitters Union Local 33.

To send flowers to the family in memory of Eugene G. Smith, please visit our flower store.