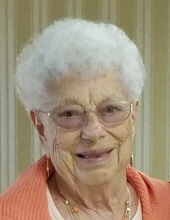 Erma E. Eygabroad, 91, of Mason City, passed away Thursday, March 18, 2021 at her home. Funeral services will be held at 10:30 a.m., Tuesday, March 23, 2021 at the Old Stone Methodist Church, Rock Falls, IA with Pastor Sue Simmons officiating. The service will be livestreamed on the Major Erickson Funeral Home Facebook page. Interment will follow in the Rock Falls Cemetery. Visitation will be held from 4:00 to 6:00 p.m., Monday, March 22, 2021 at the Major Erickson Funeral Home, 111 North Pennsylvania Ave., Mason City, IA. Social distancing and facemasks will be required at both the funeral and the visitation. Online condolences may be left for the family at www.majorericksonfuneralhome.com

On August 5, 1950 Erma was united in marriage to Wayne Eygabroad in Mason City, IA. To this union three daughters were born. Erma worked for several years as a cook at the Rock Fall School. She later stayed home to take care of her family. Erma served on the Rock Falls Cemetery board for many years.

Erma enjoyed her time with family and friends whether it was just to visit, play 500, Rummikub or play Bingo. She became a creature of habit with her weekly Lawrence Welk show on Sunday or her annual trip to Gays Mills for apples in the fall.

To send flowers to the family in memory of Erma E. Eygabroad, please visit our flower store.