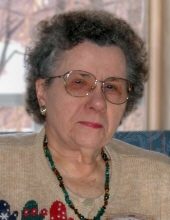 Memorials may be directed to the Humane Society of North Iowa and the First United Methodist Church of Mason City.

Elsie was born on December 25, 1923 in Birmingham, AL, a Christmas gift to her parents William A. and Issie (Turner) Doty. They moved to Pensacola, FL in 1934 where she graduated from Pensacola High School in 1942.

In Pensacola she met Navy man and the love of her life Elwin L. Musser. They were married in the Pleasant Grove Baptist Church on August 18, 1944. After Elwin's military service they settled down in 1946 in Mason City where Elwin began a long career as a news photographer for the Globe Gazette. They celebrated their 70th wedding anniversary in August of 2014 before Elwin's death on March 28, 2015. She is survived by their four children; Larry (Vicki) Musser, Colorado Springs, CO; Anita (Gary, deceased) McVay, Windsor, CO; Marilyn (Tom) Regnier, Wayzata, MN; and Neal Musser of Centerville, OH. She is also survived by 11 grandchildren and 16 great grandchildren, numerous nieces and nephews, great nieces and nephews, and cousins. She was preceded in death by Elwin, her parents, sister Eudora Nell, and brothers William, Robert and Cline Doty.

Before Elsie's marriage she worked at the telephone company and attended the Cadets Nurses Corp. She became a homemaker after her children were born and took care of the needs of others. Through the years she was a daycare provider, worked in the high school lunchroom, and was a hospice volunteer for 10 years. Elsie made visits to nursing home residents and to people that were homebound so they would know they were not forgotten. She was known for her baking; many neighbors, friends, family, and businesses she frequented were recipients of her baked goods. She loved animals and always made sure strays were given care, and her house was home to numerous pets over many years.

Summer family trips back to Pensacola, FL, and many years of family camping were treasured memories of Elsie's. Elsie and Elwin were members of the Wigwam-N-Wagon Campers for over 40 years and had been members of the 1st United Methodist Church in Mason City since 1946. She was active in her church over the years, including membership in women's church circles.

Elsie was very happy the last five years of her life living at the Good Shepherd Health Center where she made friends, welcomed new residents, and was given excellent care. She often said she wanted to adopt many of her favorite staff members. She will be greatly missed by her family, friends, and those that she always remembered.

To send flowers to the family in memory of Elsie Page Musser, please visit our flower store.