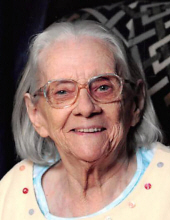 Visitation will be held one hour prior to services at the funeral home.

Elizabeth Viola Ward, the daughter of John and Sarah (Cahill) Colombo, was born August 27, 1926 in the Bronx, New York. She was the sixth child in a family of eleven. Liz was baptized and confirmed at Saint Augustine Parrish in the Bronx of New York City. Liz attended school at PS15 and graduated in June of 1941.

She was united in marriage to Robert Ward on August 7, 1943 at St. Augustine Church. After his discharge from the US Navy the couple moved to Iowa. They lived in Swaledale and Thornton for several years and moved to Clarion in 1965. Liz was a stay-at-home wife and mom. The couple moved to Mason City in the 70s and Liz worked at NIACC and at Mercy Hospital. She had a great love for her family. Her children, grandchildren and great-grandchildren were her pride and joy.

Liz was a very good cook and baker. Family favorites included her spaghetti and meatballs and frosted sugar cookies. She loved to do embroidery and did many quilt block tops pillowcases and dish towels. She also did beautiful crocheted doilies and afghans which she loved to give to the grandkids.

She was preceded in death by her parents; her husband, Robert, of 50 years; four brothers; six sisters and all of their spouses. She was the last of a generation of a family that always loved and laughed and worked together.

To send flowers to the family in memory of Elizabeth V. Ward, please visit our flower store.