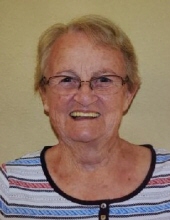 A memorial service will be held on Tuesday, February 9, 2021, at 1:00 p.m., at Major Erickson Funeral Home, 111 North Pennsylvania. A visitation will be held one hour prior to service time on Tuesday.

Inurnment will be at Memorial Park Cemetery at a later date.

Eileen Brenda Prohaski was born on May 31, 1936 to parents James and May (Sparks) Haggar in London, England. Eileen graduated high school in London, and on June 15, 1957, she was united into marriage to Charles Prohaski in England. The couple moved around through the years until Chuck was discharged from the military in 1969.

Eileen was a homemaker, and then in the later years, she worked for Madison Elementary School as a cook and she retired in 1993. Eileen loved reading, traveling, and spending time with friends and family. She was known as a social butterfly and was often the life of the party. Eileen was a beloved mother, grandmother, great grandmother, and friend, and she will be dearly missed.

Eileen was preceded in death by her husband, Chuck in 2014.

To send flowers to the family in memory of Eileen B. Prohaski, please visit our flower store.