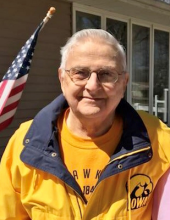 Ed graduated from Marion High School, in Marion Iowa, in 1954. On September 4, 1956 Ed was united in marriage to Judith Welper in Marion, Iowa. Ed loved the outdoors whether he was on the golf course, hunting or tending to his garden. He also enjoyed woodworking, was an avid Hawkeye fan and enjoyed traveling and spending time with friends and family. Ed was a member of the El Kahir Shrine and was a 50 year member of the Masonic Lodge.

Memorials may be directed to MercyOne Hospice of North Iowa or the American Diabetes Association in Edward’s memory.

To send flowers to the family in memory of Edward E. Lala, please visit our flower store.