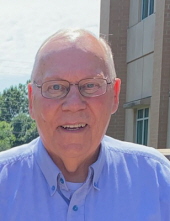 A funeral service will be held Saturday, August 3, 2019 at 2:00 p.m. at Trinity Lutheran Church 213 North Pennsylvania, with Pastor Kathy Graves officiating. Interment will be at Elmwood-St. Joseph Cemetery, on Monday August 5, 2019, at 10:00 a.m.

In lieu of flowers, a memorial fund in his name will be established for a Mason City High School Football individual scholarship.

Ed was born August 27, 1937 in Iowa City, Iowa the son of Anna Stripe. At the age of four months he was adopted by Arnold and Evelyn Lenius. He graduated from Hampton High School, Hampton, Iowa in 1956 and received a football scholarship to Iowa State University. He received a bachelor’s degree in Business Education from Iowa State Teachers College, which later became the University of Northern Iowa. He also obtained a Master’s degree in Business Education from Mankato State, Mankato, Minnesota. On December 19, 1964 Ed and Gloria married at Bethlehem Lutheran Church in Mankato, Minnesota. Ed and Gloria had four children: William, Lisa, Tara, and Mary. Ed began his teaching career at Riverside and Muscatine, Iowa before moving to Mason City in 1966. Ed taught Business Education at Mason City High School until his retirement in 1998. Ed coached a number of girls and boys sport teams, with the majority of his career coaching football. Ed’s teams won two state championships, one with the Muscatine Boys Golf team in 1965 and the other in 1978 with Mason City High School Football team.

He enjoyed most sports, and was a fan of the Green Bay Packers and New York Yankees, which he would watch with a Diet Mountain Dew. Ed found out later in life he was Irish, which he enthusiastically embraced with a trip to Ireland. Ed enjoyed all things Irish.

Ed was passionate about the success of all the individuals he coached and taught, always interested and excited to hear about their life after graduation.

He loved spending time with his wife and children, and watching and supporting his grandchildren and their activities.

Ed was preceded in death by his parents; and his biological siblings.

To send flowers to the family in memory of Edsel "Ed" Lenius, please visit our flower store.