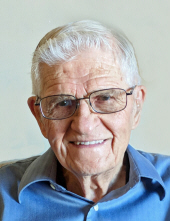 A memorial service will be held 10 a.m., Tuesday, September 28, 2021 at First Presbyterian Church in Mason City with Rev. Paul Collier officiating. The service will be livestreamed on the Major Erickson Funeral Home Facebook page. Inurnment will be at Memorial Park Cemetery with military rites by the Mason City Veterans Association.

Earl Leslie Opheim, the son of Carl and Selma (Sween) Opheim, was born January 13, 1926 at Ottosen, Iowa. He graduated from Bode High School in 1943. Earl served his country in the U.S. Navy during WW II as a Radioman 3rd Class. Upon his honorable discharge he was awarded the Purple Heart, Silver Star and two Bronze Stars. Earl continued his education at Iowa State Teachers College (now UNI) where he graduated in 1949 with a Bachelor of Arts degree in teaching. He received his Master of Arts degree in 1952 from Colorado State College of Education. On May 22, 1949 he married Shirley Surfus at Dumont, IA. Earl was a teacher and coach at Franklin Consolidated School now CAL Community Schools for 6 years. His girls’ basketball teams excelled during those years. He then moved to Mason City where he was a business teacher and counselor at Monroe Junior High for 30 years and three years at John Adams Junior High retiring in 1988. Earl also coached junior high sports in Mason City for many years and assisted Elmer Starr with high school and legion baseball. He enjoyed golfing, traveling and watching high school sports.

To send flowers to the family in memory of Earl L. Opheim, please visit our flower store.