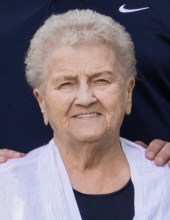 Eleanor Maxine Kepley was born on December 4, 1938 to parents George L. and Mabel (Bish) Kepley in Spring Hill, Iowa. She was nine of eleven children. Maxine grew up on a farm outside of Zion, Iowa, in a family that loved music. Her dad never got a car with a radio in it as he said he always had the best music right there live. Maxine had a beautiful singing voice and sang at many weddings. She passed her love of music on to her family, and loved teaching her silly little diddies to her children, grandchildren & great grandchildren. She graduated from Zion High School in Zion, Iowa in 1956.

After graduation, Maxine went to work for Banker’s Life in Des Moines (now known as Principle Financial). In the fall of 1959, she attended a barn dance in Mason City with a friend who had grown up in this area, and met Jerry O’Connor. The couple got engaged that winter, and were married on July 16, 1960 at St. John’s Catholic Church in Cartersville, IA. They had just celebrated their 60th wedding anniversary. Maxine moved to Mason City and went to work at JB Decker until 1961 when after the birth of their first child she decided to stay home to raise her family. She went back to work in 1978 for GMAC Finance for two years. Shortly after Principal Financial opened in Mason City in 1981 she went to work there until her retirement on April 26, 2002.

Maxine could be found at any event one of her grandchildren were participating in; including, field trips, band & choir trips & concerts, sporting events, dance recitals, plays, races, FFA banquets, boy scouts, Fair events, etc. They always knew if they looked into the audience they would see their grandma usually in the front row. She loved playing cards, especially Zonk & 500, and watching Hallmark movies or any game show. She recently got an ipad and enjoyed playing games and connecting with people on Facebook. She adored her grandchildren as well as her great grandchildren, and getting the whole family together was very important to her. Family holidays were always treasured. Maxine will be greatly missed by the many that knew and loved her.

If you are planning on attending the visitation or Funeral Mass, masks will be required, your temperature will be taken, & social distancing will be implemented.

To send flowers to the family in memory of E. Maxine O'Connor, please visit our flower store.