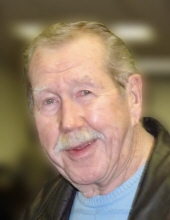 Duane Lee Anderson of Mason City, IA, formally Kensett, IA, passed away peacefully on September 4th, 2020 at MercyOne North Iowa Medical Center. Per Duane’s wishes there will be no services. Inurnment will be held in Memorial Park Cemetery. Memorials may be directed to Trinity United Methodist Church of Bolan, 4214 Tulip Lane, Kensett, IA 50448.

Duane Lee Anderson, son of Gunnar and LaVonne (Rezab) Anderson, was born at home in Plymouth, Iowa on September 6, 1933. He spent his first few years in Plymouth before his family moved to Mason City. He attended Mason City schools participating in football and baseball, graduating in 1951. He had a special interest in the sport of boxing and was actively involved with it at the Mason City Armory and in Minneapolis during high school. Shortly after high school he began working for his father in the HVAC business until he was drafted into the army in 1953 and served in the Korean conflict. Duane received the Korean, United Nations & National Defense Service Medals before he was honorably discharged in 1955 in Seattle, WA where he traveled by troop train back to Mason City.

Duane was united in marriage to the one and only love of his life, Betty Lou Johnson of Northwood, IA on September 8th, 1956. Duane had started his career as an HVAC mechanic working for the Ray E. Pauley Co. Then in 1980, he began working for Mechanical Air Systems where he became project manager and estimator. Duane retired in 1995. Duane and his wife lived on an acreage near Bolan, Iowa where they enjoyed the peacefulness of the property that they cherished and their magnificent garden that they kept. They were members of the Bolan Trinity United Methodist Church and enjoyed participating in activities within the church. If he and Betty were not traveling somewhere in their spare time, you could find Duane fishing and playing cards. During his life he was an avid fisherman. He especially enjoyed the special fishing trips with his brother traveling up north to Minnesota and Canada. It was a passion that he kept until a few years before his passing.

After Bettys death, Duane moved to Mason City and enjoyed the remaining part of his life living at the Manor. Playing cards, meeting new people and enjoying good meals at his new home, he was especially touched when members of his congregation came to his apartment to sing Christmas carols this past year while living at the Manor.

Duane was a man of many words, ranging from wise ones, smart ones, opinionated ones, and hysterical ones. He always was able to pass off some sort of metaphorical advice to the people he enjoyed talking, teaching and “preaching” to. He will be remembered by his sense of humor, his love of life and how proud he was of his family.

In true Duane fashion “See you later alligator!” and After while crocodile!

To send flowers to the family in memory of Duane Lee Anderson, please visit our flower store.