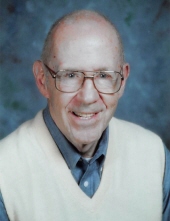 A funeral service will be held at 10:30 a.m. on Tuesday, December 7, 2021, at the First United Methodist Church, 119 South Georgia Ave. The family encourages the use of masks and social distancing while at the service and visitation.

Visitation will be held one hour prior to the service time on Tuesday.

Interment will be held in Memorial Park Cemetery. Memorials may be directed to the family of James Percival.

James A. (Jim) Percival was born on September 10, 1934, in Newton, Kansas, to James and Frances (Frana) Percival. Their family later moved to Marshalltown, Iowa where Jim attended and graduated from Marshalltown High School. As a high school student, he played football and basketball, but was most accomplished as a golfer.

After high school, Jim attended the University of Iowa, where he earned a BA degree, and then went on to the University of Iowa College of Dentistry where he earned the degree of DDS. It was in Iowa City that he met Donnabelle (Deb) Stearns, and they married on September 7, 1958. After fulfilling an obligation to the US Naval Reserves in Bremerton, Washington, they moved to Mason City in 1961, where they remained for the rest of their lives.

Jim worked as a dentist in Mason City for his entire career, first as a solo practitioner for 38 years before selling his practice. He then worked for 3 additional years with Family Dentistry of Mason City before retiring in 2002.

Jim was active in the community as a member of the Area Education Agency, the local branch of the Naval Reserves, member of the Mohawk Booster Club, and a longtime member of the Rotary Club where he served one term as President. He also had many outside interests including fishing, pheasant hunting, photography, watching football and basketball, and golf. He was a devoted husband and father and extremely supportive of the endeavors of his children and grandchildren.

He was preceded in death by his parents, James and Frances Percival, his younger brother Thomas who passed in early infancy, and his wife Donnabelle, to whom he was married for 55 years.

He is survived by his sons, Kevin (Carol) and Kurt (Carol); four grandsons, Matthew (Kristin), Benjamin (Courtney), Isaac, Zachary (Mallory); and one granddaughter, Madison. In addition he has four great grandchildren, Penny, Jaxson, Jordan, and Saige. While we all will miss him very much, we are at Peace knowing that he is with the Lord, and that he is reunited with his loved ones who have gone before him.

To send flowers to the family in memory of Dr. James A. Percivall II, please visit our flower store.