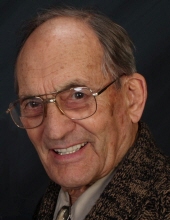 Carroll Sheridan Bogard “Bogey” was born April 23, 1922 in his family’s farmhouse north of Renwick, Iowa. After the dustbowl, during the great depression, his family moved to Renwick above the pool hall they operated. He was able to pursue his passion for baseball with Renwick High School and with numerous town teams in the area. While attending a Goldfield dance he met the love of his life, Barbara Moseley. After graduating high school he attended business school in Des Moines enabling him to take a job in Washington D.C.

He enlisted in the Army Air Corps, unable to be a pilot due to his color blindness, he trained in gunnery school and became a ball turret gunner and navigator’s assistant in a B-24 Liberator. In 1944 he was stationed in England, his crew attempted 10 missions, but on the final mission they had to bail out over France on August 8th, 1944. After intensive interrogations he was held in Stallag Luft IV. During the last 3 months of the war they were marched back and forth northern Germany to prevent their liberation. After being liberated in May of 1945 he returned home to marry Barbara Moseley on July, 8th 1945.

He decided to attend Oklahoma City University where Barb was interning for her dietetic degree. He pitched for OCU and played semi-pro for the Gassers against excellent teams including some from the “Negro Leagues.”

He started teaching and raising a family in Inwood, Iowa. He moved to Des Moines and obtained his master’s degree at Drake University then moved to Armstrong, Iowa where he became High School Principal and later, Superintendent of Schools. He supplemented his income with various summer jobs in order to take his family on yearly extensive camping trips. During this time he joined a flying club and was able to get his pilots license and pursue his passion for flight.

In 1963 he and his wife and 3 children moved to Mason City, Iowa. He started as a teacher and assistant baseball coach, then Associate Principal, and ultimately High School Principal having earned his doctorate at Iowa State University.

In 1985 he retired and enjoyed hosting “A Sentimental Journey” on KCMR, started driving veterans to the V.A Hospital in Des Moines, volunteering on mission trips to Latin America, and becoming active in the American Ex-Prisoners of War organization. He was their National Commander 2011-2012. One of his last official acts as commander was participating in the Veteran’s Day Wreath Laying Ceremony at Arlington National Cemetery and breakfast at the White House with President Obama.

After his home was in the flooding of 2008 he moved to the Village Coop. In 2017 he was presented the Service Above Self Award by the Mason City Noon Rotary Club.

To send flowers to the family in memory of Dr. Carroll S. Bogard, please visit our flower store.